The Ohio Pharmacists Association (OPA) is pleased to recognize the following outstanding pharmacists, who have exemplified leadership, excellence, and vision in their practice. They were honored as distinguished UNDER 40 award recipients at the 141st OPA Annual Conference and Trade Show on April 13, 2019 in Columbus, Ohio. The UNDER 40 Recognition Program grants young pharmacists the unique opportunity to have their professional achievements highlighted, and allows them to join the ranks of top-notch professionals from a variety of careers who have earned an UNDER 40 award. The UNDER 40 Recognition Program was sponsored by Kroger Pharmacy. More information about the achievements of each UNDER 40 Honoree can be found at the links below.

The recipient names linked below highlight the honoree's achievements. 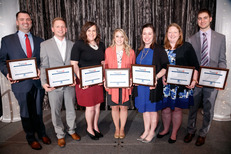 These outstanding pharmacists were honored as distinguished 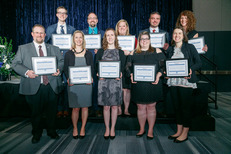 UNDER 40 award recipients at the 140th OPA Annual Conference and Trade Show on April 21 in Columbus Ohio.  The 2018 UNDER 40 Honorees are:

We would like to thank Kroger Pharmacy for their exclusive support of the UNDER 40 Recognition Program.