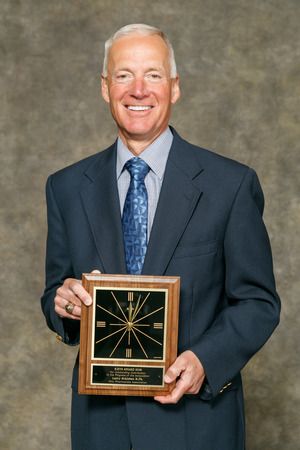 The Ohio Pharmacists Association (OPA) announced that Larry Schieber, R.Ph. of Circleville, Ohio, is the 2018 recipient of the Keys Award for his long-standing commitment to the Association. This award was presented at the OPA 140th Annual Conference held April 20-22 in Columbus.

Schieber, a 1981 graduate of The Ohio State University College of Pharmacy, and his wife Kim own and operate Schieber Family Pharmacy in Circleville. As an active OPA member, he has served as a Trustee for two terms, Vice President, President-Elect, and President. Since 2015, Schieber has served on the Board of the Ohio Pharmacists Foundation. He was the first recipient of Cardinal Health Generation Rx Champions Award for demonstrating excellence in a community-based prescription drug abuse prevention program, and is a past recipient of OPA’s Bowl of Hygeia Award recognizing outstanding community service by pharmacists. Schieber has also served as President of the Ohio State University Pharmacy Alumni Society.

“Larry Schieber's commitment and service have furthered the profession of pharmacy, and the Association is proud to honor him with this award,” said Ernest Boyd, OPA Executive Director.

OPA, established in 1879, represents more than 4,000 pharmacists, pharmacy educators, and pharmacy students throughout the state. It is OPA’s mission to unite the profession of pharmacy and encourage interprofessional relations, while promoting public health through education, discussion, and legislation.