On June 30, Governor John Kasich took a bold step forward in leveling the playing field for pharmacies and pharmacy benefit managers (PBMs), and took a giant leap forward in pulling back the curtain on PBM reimbursement, when he signed the Ohio Budget into law - complete with language backed by OPA that makes significant reforms to the PBM industry. 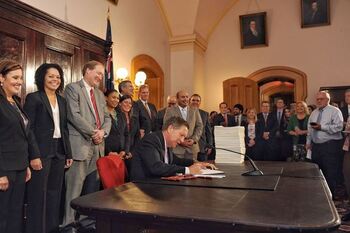 As mentioned previously, OPA and Reps. Tim Brown and Jack Cera were successful in integrating maximum allowable cost (MAC) transparency language & key pharmacy benefit manager (PBM) reforms from HB 127 into the Ohio Budget (HB 64), and since then, it has been a wild ride. And despite the fact that at one point, the language was stripped entirely from the budget, in the end the House & Senate agreed to leave the language intact, and Governor Kasich refused to veto the language!

The read the provisions that Governor Kasich signed into law, check out pages 1514-1520 of the Ohio Budget. OPA has created an issue brief with talking points on MAC pricing that can be accessed here to learn more about this issue.

We are grateful to Governor Kasich for taking this bold step to create transparency within the PBM industry, which benefits pharmacies, business owners, and patients.

Lastly, tremendous thanks to Rep. Tim Brown for his passion, hard work, and determination in seeing this legislation through. He is a true pharmacy champion, and we will be forever thankful for his diligence and advocacy. This was a long, difficult journey, but he stayed the course and ultimately pushed us past the finish line, and for that, we are extremely appreciative.

“After learning from pharmacists in my district about some of the unsavory practices occurring at the hands of some pharmacy benefit managers, I knew something had to be done to protect our vital health care providers on Main Street," said Rep. Brown. "When a pharmacist fills a prescription, they should be focused on making patients healthier – not wondering whether filling that prescription could result in a loss of hundreds of dollars due to PBM pricing schemes. This legislation not only helps give pharmacies a leg to stand on, but it also arms employers with the information they need to make better, more cost effective health plan decisions. With health care premiums shooting through the roof, greater transparency should shed light on a big part of the problem. These provisions represent a positive step forward in building a stronger Ohio."

"Congratulations to OPA, Ohio pharmacists and everyone involved with the successful enactment of this legislation," said National Community Pharmacists Association (NCPA) CEO B. Douglas Hoey, RPh, MBA. "More transparency into drug pricing and reimbursement rates set by PBM corporations is desperately needed and this new law is an important step in that direction. This legislation not only addresses below-cost payments by PBM corporations to small business community pharmacies, but it would also provide insurance plans with more information to guard against PBM corporations overcharging payers as everyone is struggling with rising health insurance premiums. NCPA thanks Rep. Tim Brown, the Ohio legislature and also Governor John Kasich for supporting this legislation that protects the citizens of Ohio, health care providers, small business owners and health plans."

There are too many people to thank to be honest. There were hundreds of pharmacists and student pharmacists who met, called, and emailed their legislators about this issue. There were district events, town halls, roundtables, and more. The outpour of support and action has been inspiring. The National Community Pharmacists Association and their state government affairs director Matt DiLoreto have been incredible assets. The buying groups were all major helps - American Pharmacy Services Corporation, Miami-Luken/REM Corp, Independent Pharmacy Cooperative, American Pharmacy Cooperative Inc. The small pharmacy chains like Discount Drug Mart, Ritzman's, Shriver's, Hometown Pharmacies, & Riesbeck's were all big players in this too. And as you might imagine, we can't even begin to name all of the independent pharmacists who pitched in. THANK YOU all of those members who helped carry the load on this legislation. This has been a true team effort.

Outside of the support of volunteers and members, and the work of OPA's legislative staff in building coalitions and meeting with legislators, supporting political campaigns is a huge part of the advocacy process. We need to support good legislators who support pharmacy and the patients we serve, and we need to build on these recent success by working towards even bigger goals. Please consider financial support of our legislative efforts by contributing to the OPA Pharmacy PAC. 100% of Pharmacy PAC money contributed by pharmacists goes to help candidates who support pharmacy in Ohio.