Early this morning, Governor Mike DeWine signed the state budget bill, obliterating the current pharmacy benefits system in Medicaid managed care, and reinvesting $100 million back into Ohio pharmacies that were fleeced in recent years through "spread pricing" by PBMs in the program. The signing is another major step in fixing a broken Medicaid payment model, which has been OPA's top priority. 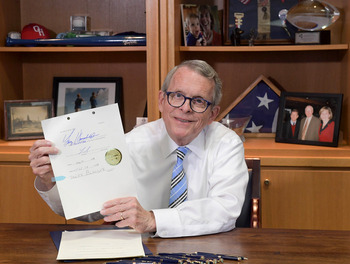 The saga in Ohio over pharmacy benefit managers (PBMs) has been well-chronicled and reached a national profile thanks to the efforts of OPA members and staff, as well as the instrumental work of many elected officials and the persistent, unrelenting accountability of the Columbus Dispatch.

Yesterday, the Ohio House of Representatives and Ohio Senate both agreed on a final consensus on the budget language contained in HB 166, and both chambers voted overwhelmingly in support of the bill, sending it to Governor DeWine for signature. He signed it today with a number of vetoes, some of which impacted the state PBM and pharmacy policies.

There were some conflicting reports in the media today on what policy was kept and what was vetoed, but overall, DeWine kept the fundamental core of the policies intact. The Dispatch did a write-up on the vetoes here, but be sure to read our breakdown below for a good overview of what is actually in the enacted version that Governor DeWine signed. All in all, some policy pieces will require some vigilance on our part, but let's be clear: we believe the budget overall is a very positive step forward for drug pricing accountability, PBM reform, and preservation of local pharmacy access.

As we have mentioned in recent weeks, key pieces of Medicaid PBM and pharmacy reform were hotly debated between both House and Senate leaders. Even Governor DeWine's office and the Department of Medicaid were in final discussions with lawmakers over which direction the state should go in its quest to repair Ohio's broken pharmacy benefits program within Medicaid managed care.

OPA has done absolutely everything we could to pull the rug out from under the status quo, knowing how the warped incentives, below-cost reimbursements, and conflicts of interest had shredded pharmacy staffing levels and crushed local pharmacy access.

While many provisions will require more clarity and a lot of work to implement properly, here are the highlights from the bill, now that final vetoes are in the books:

As mentioned earlier this week, we are thankful to the House and Senate for rolling up their sleeves and putting serious thought into these PBM issues. While we have some concerns with the possible collateral damage of dealing with a new PBM with monopolistic power in the Medicaid program, we believe that the legislature’s reinvestments in Ohio pharmacies are a sign that there’s an expectation that the future will be sustainable and protect access. This was a glaring need that had to be addressed, and we applaud to the legislature for doing so.

We still strongly believe that PBMs with conflicts of interest in the pharmacy marketplace should not have price-setting capabilities, and until that is resolved, both the state and its providers will be vulnerable to be taken advantage of. We are eager to work with lawmakers, Medicaid officials, managed care plans, and Governor DeWine in picking up the pieces from Ohio’s broken PBM mess, rebuilding the pharmacy program, and realigning the incentives to drive better value for taxpayers and create a new, outcomes-driven model for other states to follow.

We will update members soon with complete details as they become available, so stay tuned to the OPA e-bulletins as well as the Columbus Dispatch. The Dispatch has been instrumental in holding state officials accountable over the last year and half to get this mess fixed.

We'd like to thank Senate President Larry Obhof, House Speaker Larry Householder, and Governor Mike DeWine for prioritizing these issues and seeking out our input. There were also a litany of lawmakers working hard to push for reform in both chambers and both sides of the aisle.

Senate Finance Committee Chairman Matt Dolan, who in the previous General Assembly carried Ohio's pivotal pharmacist provider status legislation, was instrumental in addressing the ongoing pharmacy reimbursement issues that were knocking out pharmacies across the state, leaving communities without access to local pharmacist care. Dolan and the Senate reinvested $100 million in supplemental dispensing fees over the biennium to stop the bleeding and restabilize the pharmacy marketplace. House FInance Committee Chairman Scott Oelslager, Speaker Pro Tempore Jim Butler, Representative Jack Cera, and Speaker Householder graciously kept the allocation in the budget, and sent it off to the governor.

We've been fortunate to have the two most recent Senate presidents and three most recent House speakers take PBM reform seriously, and we are pleased with the ongoing progress Ohio has made to reshape pharmacy benefits. We are also thankful that Governor DeWine and state Attorney General Dave Yost continue to be nationwide leaders in moving the ball forward on PBM transparency and accountability.

“The Senate recognized the serious problem facing our local pharmacists," said Senate President Larry Obhof. "I have witnessed the closure of local pharmacies in my own district, as have many other legislators. We are proud to take this extra step to ensure that these trusted local businesses can continue providing quality healthcare to the people of Ohio.” "I'm so proud of our work with my local pharmacists, OPA, Speaker Householder, and Governor DeWine to finally deliver a big prescription drug pricing win to Ohioans," said Rep. Scott Lipps, who had vowed to OPA members two years ago that he would work tirelessly to push meaningful PBM changes across the finish line. "Ohio continues to be a national leader in PBM reform."

"I am honored to have worked with Rep Scott Lipps and Antonio Ciacca on undoubtedly one of the most important pieces of legislation in the country," said Rep. Thomas West, who has been pushing for PBM transparency and drug pricing affordability ever since entering the legislature. "When we began this process, we were told that the PBM industry was too big and to powerful to get our legislation passed. Today, it's law, and because of our persistence, it is one of the most talked about pieces of legislation in the country. I am indeed pleased that we were able to deliver on our promise to lower prescription drug prices and help community pharmacies stay open. The Prescription Drug Co-Pay Integrity Act (contained in HB 166) will increase transparency and cut costs for millions of Ohioans who utilize pharmacies to purchase the prescription drugs they need every day. This new legislation is representative of both Democratic and Republican perspectives that culminated in commonsense consumer protections for all Ohioans. When we work together, we get things done."

"I've appreciated all the pharmacists in my district who have been educating me about these ongoing PBM drug pricing issues over the last few years," said Rep. Jack Cera. "We began working on PBM transparency and reform a few budgets ago, and it's good to see Ohio take a big step forward in protecting local pharmacy access and holding the PBM industry accountable."

"We are very grateful to the legislature and Governor DeWine for enacting many positive policy changes in the state budget that help re-establish the sustainability of pharmacy in Ohio," said OPA President Brigid Groves. "We look forward to continuing to evolve pharmacy practice in Ohio in collaboration with the Department of Medicaid and the Medicaid managed care organizations. The provisions established by the budget will allow pharmacists to create more value and deliver higher quality through direct provision of pharmacist-provided patient care."

"We are very encouraged that the changes made in this budget will bring greater accountability to the Medicaid pharmacy program," said OPA Executive Director Ernie Boyd. "The changes made will give Medicaid and the public more control over this process. We also appreciate that community pharmacies will be given a more fair reimbursement that can help ensure more communities don't lose local pharmacy choice and access."

While our work to reform the PBM industry isn't over, we look forward to positioning pharmacists to deliver even greater value to patients and the state by working to realign incentives in more service-oriented and outcomes-driven directions. Ohio suffers from some of the worst health outcomes in the country, and we believe pharmacists can be better leveraged to help address some of our state's most pressing health care crises.

To our members who have been waiting years for the program to be fixed, thank you for your work to call attention to these issues and help move the ball forward. There was a ton of member outreach over the last two years, so thanks to each of you who took the time to educate media and lawmakers. We still have a lot of work to do, so please make sure you let the Department of Medicaid know your thoughts on how to improve the program, and continue talking to your state officials about what's happening in pharmacy.

Lastly, thanks to Darrel Rowland, Marty Schladen, Cathy Candisky, Lucas Sullivan, and the rest of the team at the Columbus Dispatch for their award-winning Side Effects series that continues to expose our nation's broken prescription drug supply chain and pricing system. Their work is resulting in long-overdue, national scrutiny and reform to the PBM industry. While the system is nowhere near fixed, they have provided unprecedented accountability, and none of this progress would be possible without their instrumental work. We can't say it enough: Support local journalism.

Stay tuned for further details from OPA about the new policy roll-outs.

Thank you for your support in our fight to fix Ohio's Medicaid pharmacy system!